Skip to content
June 24, 2012 7:10 AM
Sgt. Kelsey Shaw and First
Lt. Andrew Shaw show a wide range of emotions while being welcomed by The Here
at Home Committee and the Norman Rockwell Museum on the museum’s grounds in
Stockbridge in an event inspired by Rockwell’s 1945 ‘Happy Homecoming’ painting.
(Stephanie Zollshan / Berkshire Eagle Staff)

Sgt. Kelsey Shaw takes a
minute to hold her 7-week-old daughter Aida and to talk to her daughter Emma, 7,
as she and her husband, First Lt. Andrew Shaw, were welcomed by the Here at Home
Committee at the Norman Rockwell Museum on Saturday. (Stephanie Zollshan /
Berkshire Eagle Staff)

Sunday June 24, 2012STOCKBRIDGE — The moment a soldier returns from war to his own doorstep, his
family, neighbors — even the man fixing the roof — all react with unalloyed
joy.

That’s how Norman Rockwell depicted it in a 1945 painting. And that’s how a
local group devoted to welcoming home servicemen and women hope to continue to
commemorate military homecomings.

More than 65 years after he painted “The Homecoming,” the Saturday Evening
Post cover currently on loan to the Norman Rockwell Museum has inspired a
celebration of local husband-and-wife soldiers.

First Lt. Andrew Shaw and Sgt. Kelsey Shaw, both 31, arrived by police escort
to the Stockbridge museum Saturday afternoon. They were greeted by a path of
waving American flags and dozens of onlookers, including their four young
children, all there to “officially” welcome them home.

“I’m absolutely spellbound,” said Kelsey Shaw, holding her infant daughter as
she spoke. “The people here thanking us, and the smiles on their faces and
flag-waving, it’s truly touching.”

The Shaws, who live in Lee, returned from duty in the Army’s 283rd
Transportation Company in Iraq between 2004 and 2005. But there’s no time limit
on when it’s appropriate to honor soldiers’ commitment to their country,
according to Ro sanne Frieri, director of veteran services for Pittsfield and a
founder of the Here at Home Committee, which has organized 20 similar events for
local soldiers since it formed in 2007.

In a brief ceremony at the museum, Col. Daniel Swift of Pittsfield spoke to
the crowd about country’s changing reactions to returning veterans — how they
were lauded after World War II, and maligned after the Vietnam War. “We didn’t
have an outpouring. We didn’t have community support,” he said.

Nowadays, honoring warriors is the public’s duty, he said: “Soldiers like
Andy and Kelsey don’t look for notoriety. It’s the community’s responsibility to
come to gether to

Tech Sgt. Shane Willis, who
served three tours in Iraq and will soon be deployed again to Afghanistan, holds
Shane Jr., 2, as he waits to welcome home the Shaws on Saturday. (Stephanie
Zollshan / Berkshire Eagle Staff)

Kelsey Shaw averred that she joined the Army not for recognition, but because
she felt it was the right thing to do. She and her husband are both immigrants
— Kelsey from Thailand and Cam bodia; Andrew from Canada — a heritage that
makes them all the more proud to serve the United States.

“Because of my immigration status I value this country even more,” she said. 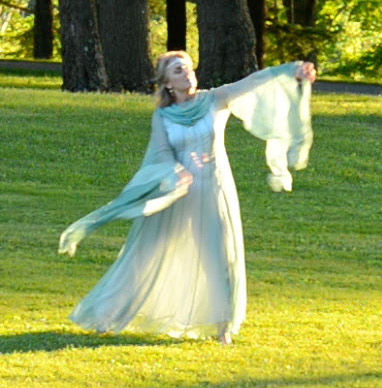